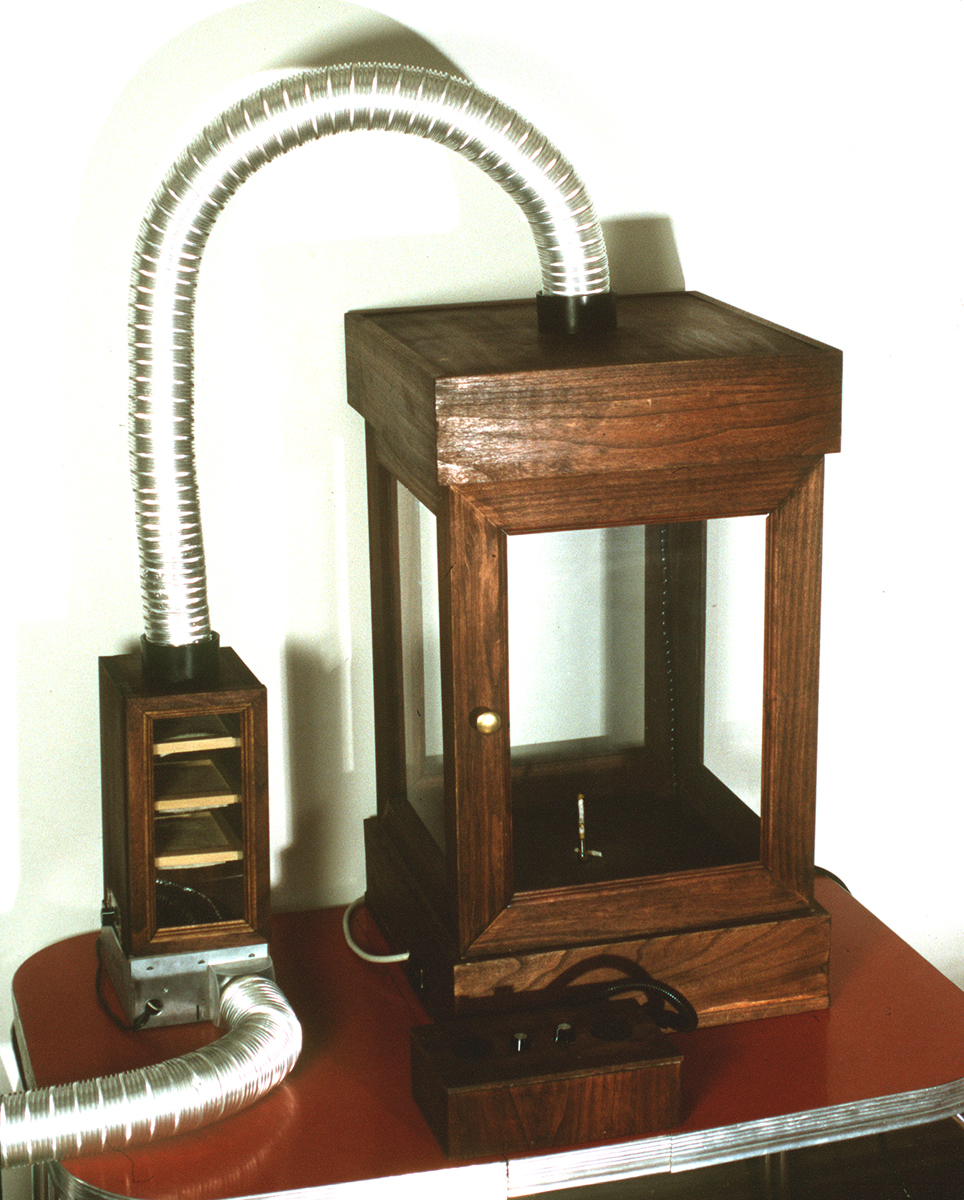 The original concept for this piece was formed on a trip to my original home in Pittsburgh.  I was driving along a highway that followed a very industrialized portion of the Ohio River. My view was dominated by a mass of steel factories and their billowing smokestacks pouring unknown amounts of byproduct into the surrounding environment.  I too, was smoking; a habit that is especially hard to break on long drives.  That’s when the connection occurred to me, that I am no different than these factories.  I am a living machine that consumes and creates.  I combined this with other concepts that I was currently exploring, including ideas about interactive sculpture and its ability to create “random” byproducts through user interaction.

In The Smoker, these byproducts possess their own aesthetic.  There are random ash piles that build up over time.  Second, there are billowing smoke patterns, which the viewer is able to control, through the exhaust fan switches on the control and filter boxes. Finally, there are random tar stains, which build up in the filter device itself. The filter box has been designed to include removable filters.   With enough time, these tar-stained filters could be displayed along with the piece.

Other intentions seemed to emerge during and after the completion of the sculpture.  The mechanical smoker can be seen as an attempt to show the beauty in evil; this evil of course, is the tobacco industry.  This device also simulates the actions of the lungs during the process of smoking.  This idea is stressed by the sounds of my own breathing and coughing, which can be heard as the pump breathes in and out.  The speed of the breathing matches the speed of the pump, which is controlled by the viewer’s interaction with another dial on the control box.  The heavy mechanical nature of this machine will at the same time stress the toxic nature of smoking.   The single cigarette at the heart of this machine also shows the isolation that is placed upon smokers in today’s society.

One final point of this piece was for me to quit smoking through a closer examination of the act itself.  Unfortunately, this has not worked out so well.  I find myself smoking with the machine as though it was a friend on a smoke break.  It has actually surprised me, that this machine has begun to take on a personality of it’s own through its ability to mimic a simple human act.  In the end I have realized that although there is an intrinsic beauty created by a cigarette’s byproducts, the good still does not outweigh the evil.